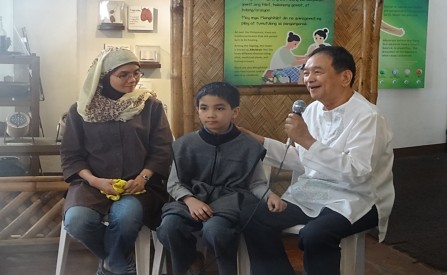 Aiming to re-introduce to urban children the ancient art of Hilot and Philippine traditional ways of healing, ATHAG and Museo Pambata teamed up to develop the Museo’s former Botica ng Barrio into Bahay Hilot, which is a traditional Albularyo’s house.

The Bahay Hilot exhibit showcases a bit of history and basic Hilot concepts. There is also a display of an Albularyo’s tools such as a mortar and pestle used to prepare poultices, and a clay pot and stove that is traditionally used to prepare herbal teas used for healing. Some implements less commonly seen by the public such as a booklet of orasyon and an assortment of medallions are also on display.

The Bahay Hilot was launched with a brief program, ceremony, and workshop. Messages about the Bahay Hilot project and TAHC month were given by Museo Pambata Executive Director Maricel Montero and PITAHC Director General Dr. Isidro Sia, respectively. Meanwhile, ATHAG President and Albularyo  Bibiano “Boy” Fajardo demonstrated the traditional healing process with the special participation of researcher Asst. Prof. Marie-Sol Hidalgo and her son. After the program, a ritual of the Four Elements was led by Albularyo Boy.

Another highlight of the launch was the workshop on basic Hilot for common ailments of children and family members. The activity was supported by De La Salle University students under the Community Engagement and Service Learning Program headed by Ms. Paz Esperanza “Nina” Poblador.