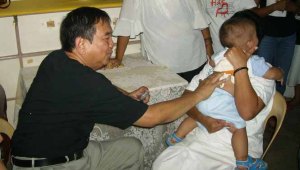 Dr. Bibiano Fajardo checks for thermal changes along the baby’s back, a traditional way of determining imbalances.

The exact beginnings of Hilot are shrouded in the mists of past, but its pervasiveness in Philippine culture is very clear. Hilot is practised all over the islands, cutting across ethno-linguistic divisions. While it is known by different names, and preferred practices may vary across the regions, the underlying principles are unmistakably the same.

Despite its widespread influence, Hilot is a little-understood mode of healing. Individuals who have experienced Hilot cannot explain how and why they got well, only that they felt better after the Hilot session. Asking a traditional Hilot practitioner may just yield more questions, because in all likelihood, the albularyo or manghihilot (traditional healer) will explain Hilot as he learned it–through espirito (spirit), encanto (elementals), and kulam (spells). This is part of the reason why Hilot, as a healing tradition, began to be looked upon with skepticism as conventional western medicine–with its emphasis on science and empiricism–rose to prominence.

Spirit, Mind/Emotions, & Body. Hilot is grounded in a deep faith in Espirito (Spirit/God), the source of life and healing.  Espirito is everywhere and pervades all living things, and is manifested in the essential values of unconditional love and service. Hilot, as a holistic healing modality, takes the whole person–spirit, mind/emotions, and body–into consideration, and sees health as the natural consequence of the harmony among these three faculties.

These terminologies and associations, being very much a part of Philippine folklore and cultural beliefs, were embraced by early Filipinos and handed down through generations of Filipino traditional healers–until today, when many people no longer believe in such beings and dismiss them as mere superstition. Unfortunately, Hilot, because it has thrived on these associations, has also been assigned the same fate, and is viewed by many people–most of whom have no actual experience with Hilot–as an outdated old folks’ practice tinged with “quackery.”

But a closer look at Hilot reveals that it is, in fact, scientific–and solidly grounded on natural and universal laws.

The Science behind Hilot

It took an albularyo with an unusual background to realize that there was more to Hilot healing than miracles, encantos, and kulam. A product of an exclusive boys’ school and a graduate of chemical engineering, the young Bibiano “Boy” Fajardo did not fit the stereotype of a typical albularyo’s apprentice, but was drawn to traditional healing by his early experiences with Hilot, oracion, and summers spent preparing herbal dressings for his uncle, who circumcised the boys of the neighborhood.  As a young man, he apprenticed with  all albularyos who were willing to take him under their wing and learned as much as he could from them.

Sometimes, an albularyo would mutter a mysterious, unintelligible oracion–and poof! The patient’s pain would disappear, as if by magic. When asked how he did it, the albularyo would invariably reply that it was the doing of the Espirito, or God, because a healer is just a channel of the Espirito. Given his scientific background, Bibiano “Boy” Fajardo could not accept this explanation at face value, and strove to find a tangible reason behind these “miracles.”

As he went deeper and deeper into the practice of Hilot, he realized that the techniques he was practising followed natural laws he had studied in chemical engineering. For example, the mystifying concept of init-lamig–which has been observed by generations of Filipinos without knowing exactly why–is actually the second law of thermodynamics at work. Armed with a new lens with which to view his knowledge on Hilot healing, Bibiano Fajardo continued learning, healing, and most important,  integrating these two seemingly divergent worlds, until he came up with a pioneering scientific framework of Hilot, which could also be applied to other healing modalities.

Electromagnetic force. The previously inexplicable workings of the Espirito, for which there was previously no other word but “miracle,” can now be explained through its concrete and scientific manifestation–Electromagnetic force (Emf), one of the four fundamental forces of nature which produces electricity, magnetism,light, and affects everything on the planet.

Body systems, organs, and diseases. The four elements, far from being far-out concepts, are a very practical and down-to-earth illustration of the workings of the body. Each element corresponds to physical systems and organs that embody it–the element of earth represents man’s flesh and bones, water represents the blood and other body fluids, air signifies the air we breathe, and fire refers to the body’s metabolism and energy. The imbalances which used to be explained away through different encantos are actually ailments affecting the organs related to that specific element.  Mind/emotion disharmony is more popularly known in this day and age as “stress”–and, as scientists are discovering, it is positively linked to disease.

By coming up with a scientific framework explaining how Hilot acts to create changes in the body (through biomechanical, neuroelectrical, biochemical, and electromagnetical means), Dr. Bibiano Fajardo hopes to bring the healing benefits of Hilot closer to present and future generations, and demonstrate Hilot’s continuing relevance to modern life. He also aims to dispel popular misconceptions that Hilot is nothing more than a Filipino brand of massage, or worse, that it is a form of quackery. Such labels are a clear disservice to Hilot, the Philippines’ ancient healing system whose wisdom encompasses many other traditional and modern healing modalities.

*This article is based on Dr. Bibiano Fajardo and Ma. Aleli Pansacola’s book, Hilot: The Science of the Ancient Filipino Healing Arts (Revised Edition) published by Anvil Publishing, Inc.

4 thoughts on “Hilot: Tradition and Science”